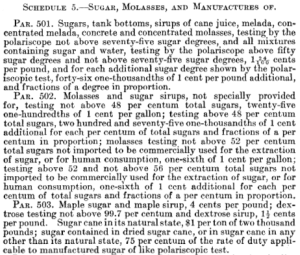 One of the more ignorant candidates pretending to be Texan brayed that the Smoot-Hawley tariff caused the Great Depression. Looter websites have already called this a lie (which is true) but swap in their own falsehood (that the depression was caused by insufficient socialism). As usual, neither the Christian socialist (right) nor bureaucratic socialist (left) version is correct, and it is a safe bet none actually read the tariff.
The Tariff Act of 1930 and the 1922 tariff are virtually identical. Some schedules vary in each book, but the most obvious difference is the added prohibition enforcement powers given customs and the Coast Guard in 1930. Both books were prepared during Republican administrations, but no one who hasn’t read the schedules can point to a difference in the schedules important enough to destroy the US economy. I’ve read them and I can point to the most important difference–Schedule 5, Sugar… (see above and below)

Prohibition Commissioner James M. Doran, a chemist, reported in February of 1930 that 95% of all whiskey consumed in the United States was made from corn sugar. This revealed the true reason for much of the stock market Crash of 1929. Federal grand juries were handing up true bills charging corn sugar factories with conspiracy to violate the prohibition law. Hubinger Brothers, Corn Products Refining and Fleischman were hauled into the dock because corn sugar and yeast was producing booze worth 95% of the entire Federal Revenue. Herbert Hoover, elected on the Republican prohibition enforcement platform, used federal conspiracy indictments to shut down corn sugar as a precursor, and the tariff schedule to throttle the importation of  sugar from Cuba, Brazil, the Philippine Islands–everywhere. In Smoot and Hawley’s 1930 tariff, Schedule 5, the tax on sugar was nearly doubled, on maple sugar exactly doubled, and on sugar cane the increase was 250%. But the corn sugar industry would derive no protection from imports–or from federal search parties and arrest warrants. 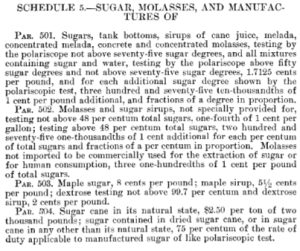 The truth is that everyone in America understood in 1932 that the two new force Amendments–the income tax (copied from the Communist Manifesto) and the prohibition amendment (copied from the fanatically mystical Prohibition Party platform) had turned the Constitution from a limitation on government powers into machinery with which to threaten peaceful individuals with deadly force–to the detriment of the First, Fourth, Fifth, Sixth and Tenth Amendments.

Governor Gifford Pinchot (R-PA) had banned all movies featuring beer or hip flasks; Marron v. United States allowed government agents to seize books and papers for evidence, no steenkin’ warrant needed for that or for wiretaps. Carolina bootlegger Manly (Manley?) Sullivan’s victory for the Fifth Amendment was reversed when the Supreme Court issued its Catch-22 decision that bootleggers had to report illegal income. Herbert Hoover helped tamper with judicial matters such as jurisdiction, jury selection… and even threatened the Supreme Court justices of Puerto Rico over their nullification of local prohibition.

Not all states had income taxes but those that did Hoover unleashed on beer barons, sugar and yeast producers by letting state income tax collectors peek at their corporate federal income tax returns. This “publicity” was one of the blackmail threats on excise tax returns exploited in 1911 to overcome opposition to the income tax amendment. But the income tax never replaced the tariff or excise once the suckers were fleeced; all three remain to this day.  Every Amendment in the Bill of Rights was mangled beyond recognition by income tax and prohibitionist jurisprudence. The income tax–itself the main culprit in the Panic of 1893 and subsequent Depression, The Great Depression, the 1987 Crash and Depression and the recent Asset-Forfeiture (mislabeled Subprime) Crash–still threatens every American with the same sort of altruist dictatorship that crushed Russia from 1917 to 1991, plus crashes and depressons. For the past 45 years voters in all semi-free States have had the option of lowering taxes and repealing bad laws by casting spoiler ballots for Libertarian candidates. Every spoiler vote you cast has approximately ten times the law-repealing power of a vote wasted on looter party candidates.

Need translations of what was happening in other countries during that economic collapse?