“What are you voting for” does not assume you are a fool. After all, if looter politicians raise taxes or impose nonsensical fines and imprisonment, you get robbed, jailed and beaten, not them. If addled Trilbys elect a televangelist, your daughter may have to travel to Canada for a safe abortion. Your son may get kidnapped into jail, to be ransomed by losing your savings. Kleptocrats, on the other hand, get their name on a government paycheck or handout if their party’s propaganda rounds up the most votes. Smart people vote for freedom, justice, honesty, self-esteem and other principled virtues. Fools vote for grinning politicians.

“Who are you voting for?” means the questioner assumes you’re a fool. Looter soft machines are in business for what they can rob or steal. Politicians try hard to keep you from reading their platforms. Great minds discuss third-party platforms. Average minds discuss events. Small minds discuss and vote for people. 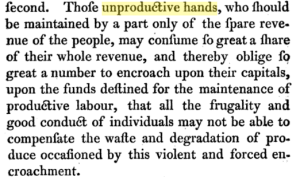 How many times in the teevee debates did you hear a Kleptocracy candidate refer to its party platform? I’m guessing zero. But everything they promise comes straight out of the party platform that they and their delegates have read very carefully. Every such platform promises to send men with guns to grab money and property from the crowds that vote them that power. Those unproductive hands then convert that treasure into paychecks for parasites.

Observe how well misplaced integrity worked for the communists. The Red Terror plus crop damage from an Icelandic volcano inspired the formation of a communist movement in Germany. Their income tax manifesto platform was translated into English in 1850 and enforced by Red Republicans during the Civil War and Reconstruction. It was revived in 1893-5 (then struck down because it destroyed the economy). Sixty-five years after it was written in Germany by Germans the communist income tax was injected into the U.S. Constitution. How? Because its adherents consistently voted for looting by men with guns, no matter which politician espoused it.

The libertarian party platform requires our candidates to look for every possible way to avoid sending men with guns to force you to act against your judgment. No matter who volunteers to be the libertarian candidate, it is for that platform that our voters are expressing effective demand with their votes. Those 2% spoiler votes are what change laws, court rulings and political constitutions. Parties that vote for freedom without regard to personalities force parasitical politicians to change their platforms and laws. It’s either that or they lose the elections and have to work for a living. The case for voting libertarian is that you and I derive lasting benefit from repealing bad laws with our votes.

4 thoughts on “What are you voting for?”