Enabling Act in 1927 America meant legislation allowing a municipality to choose the jurisdiction of a neighboring county. The following year, the Republican Party adopted a War on Drinks plank.

President Herbert Hoover used tax laws as a bludgeon to enforce religious sumptuary laws under the 18th Amendment, changed Enabling into Looting–and destroyed the economy in the process. Hoover also sought to curb German heroin exports, a disputed market that lay at the root of WWI. But Germany owed war reparations to everyone, so Hoover declared a Moratorium on payments, which allowed the Reich to skip payments and build up armaments instead of throttling the traffic. Germany’s Christian Nationalists chose Adolf Hitler after Hoover’s defeat, and the Reichstag was soon ablaze with fire and patriotic sentiment. The Enabling Act was the NSDAP’s license to violate individual rights. Here are some highlights of the speech:

By its decision to carry out the political and moral cleansing of our public life, the Government is creating and securing the conditions for a really deep and inner religious life. The advantages for the individual which may be derived from compromises with atheistic organizations do not compare in any way with the consequences which are visible in the destruction of our common religious and ethical values.

The Government will treat all other denominations with objective and impartial justice. It cannot, however, tolerate allowing membership of a certain denomination or of a certain race being used as a release from all common legal obligations, or as a blank cheque for unpunishable behavior, or for the toleration of crimes. [The national Government will allow and confirm to the Christian denominations the enjoyment of their due influence in schools and education.] And it will be concerned for the sincere cooperation between Church and State.

The struggle against the materialistic ideology and for the erection of a true people’s community (Volksgemeinschaft) serves as much the interests of the German nation as of our Christian faith. …The national Government, seeing in Christianity the unshakable foundation of the moral and ethical life of our people, attaches utmost importance to the cultivation and maintenance of the friendliest relations with the Holy See. …The rights of the churches will not be curtailed; their position in relation to the State will not be changed. 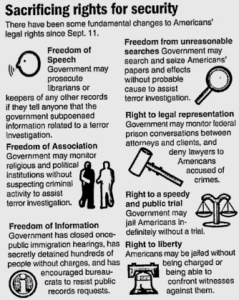 After Christian Nationalists in America began violently meddling in the ruins of the Ottoman Empire, religiously devout persons no less fanatical attacked The Pentagon and civilian buildings. The result of U.S. voting by people who rejected libertarian non-aggression was the same as in Germany, where voters preferred folksy Bible-quoting politicians to non-violent “liberals.”** Buildings were soon ablaze with jet fuel and fiery patriotic sentiment, and the Enabling Act was enlarged and recycled into the Patriot Act.. The Bush Jr. Administration even threw in a 1929-style Asset-Forfeiture Crash and Depression, to round out the picture. This was the result of expanded search-and-seizure powers becoming a license to loot under law as interpreted by the Kleptocracy and its courts. Mass wiretaps and surveillance, star chambers, kidnapping pens in Communist Cuba–all or these things are the result of fanatical mysticism grabbing the helm of government. American voters will, in November, have the opportunity to vote for freedom and against isolationist policing of foreign sovereignties. The rest of the world is waiting for our example.

** Liberal in German parlance at the time meant a watered-down form of mixed-economy libertarianism, as in dictionaries today. Hitler’s party made the word an epithet which the defeated GOP picked up and began hurling in 1932. To this, communists and socialists responded with whoops of joy!

Why not delve into what sort of voting caused the 1929 Crash? Prohibition and The Crash–Cause and Effect in 1929 does exactly that, matching newspaper accounts against stock market reactions and competing theories. It is live on Amazon Kindle for the price of a pint.

For intelligible translation or fluent interpreting in many subject areas in Spanish, Portuguese and English, get in touch.

One thought on “Patriot Enabling Acts”