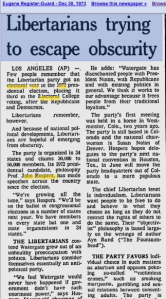 Democratic Party activists chosen to cast electoral votes can still WIN Dec 19–if by winning we mean preserving women’s individual rights to make their own reproductive choices, and ending the GO-Pee’s economically suicidal Prohibitionism and War on Everything and Everyone Everywhere.

Backing Red China’s coercive tithes to Gaian religious belief in Misanthropomorphic Global Warming was the non-starter that has already cost Dems the election, those federal paychecks, and the hand in the till. George McGovern’s pandering for unilateral disarmament and surrender to Soviet communism had the same effect when he lost to Dick Nixon in 1972.  But still on the table are the coat-hanger abortions faith-based fanatics struggle to bring back. Then there’s the ramping up of Prohibitionism to restore gunfights to the streets of El Paso and Chicago–plus another asset-forfeiture crash with unemployment and economic depression.

Roger MacBride’s Libertarian electoral vote made pro-choice non-looters impossible for Republicans to ignore. War was raging as Nixon’s National Socialists struggled to allow States to legally lynch Planned Parenthood doctors. Within about a month of that single Libertarian electoral vote hitting the Federal Register, the Supreme Court ruled that women, like blacks, should have individual rights after all. Roe v. Wade was the LP’s first major victory for enforcement of individual rights through spoiler votes.

Democratic electors can vote for Gary Johnson, and set the example for their Republican adversaries. One such vote sufficed to persuade the Republican-dominated Supreme Court to strike down state abortion laws. Their fear was that women might find out about the pro-defense, pro-choice party with Tonie Nathan on the ticket defending individual rights for women. Roger MacBride’s electoral spoiler vote for Libertarian candidate John Hospers caused–I’ll wager–the Nixon appointee to write that majority decision. The 1973 news article shown mentions Ayn Rand, Objectivism, victimless crimes and abortion rights–the true and original Libertarian party agenda. We just earned 4 million votes–as many as are cast in the State of Virginia for its 13 electoral votes.

The Libertarian Party handed the Dems New Mexico’s five (05) electoral votes plus .  They still lost, thanks to a platform preaching ecological fascism and men with guns busting our kids for marijuana. So why not return those votes to the LP.org rather than waste them in a Quixotic protest that only adds insult to injury? Democratic partisans lacked the courage to stop police from murdering youth over marijuana. This is their chance to make a move for freedom and rights. Democrats could set an example to governments all over the world that now violate the individual rights of women-including use of deadly violence to enforce prohibitionism to benefit organized crime. The LP was the first party to earn an electoral vote for a pro-choice woman candidate.

One thought on “Dem Jeffersonian Electors could still WIN”