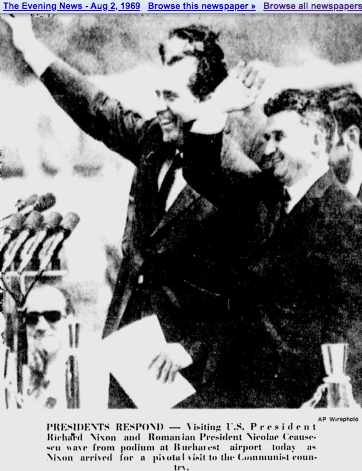 Romania struck down its Comstock laws and legalized female individual rights back in the 1950s, before there were birth-control pills. Communist dictator Nicolae Ceausescu in 1966 decreed American-style Comstock coercion of the sort President Grant had signed in 1873. Both laws banned pregnancy termination, contraceptives, publications or even private speech about such subjects and provided fines and imprisonment. The Romanian birth rate doubled in 1967, and the maternal mortality rate tripled under Ceausescu’s use of national State coercion to ward off the “race suicide” danger Republican Theodore Roosevelt penned, opening the gates for collectivist eugenics with forced labor replacing the individual rights of women. 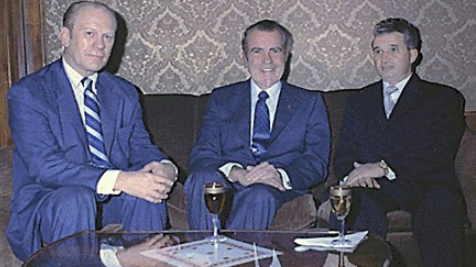 Ford, Nixon and Ceausescu, before defeat, impeachment and execution

Ceausescu immediately became the fair-haired boy of the Republican party. Nixon in 1972 made a point of aping Ceausescu’s visit to China the previous year. Dixiecrats sought to emulate Ceausescu’s Lebensborn policy of stripping women of rights and sending them into forced labor. This they accomplished by threatening (and occasionally shooting) physicians. As late as 1983, Republican Vice President George H. W. Bush referred to Ceausescu as “the good communist”.

But disaster struck in 1972 when nearly 4000 voters (and one elector) cast ballots for the Libertarian Party platform, which said:

“We further support the repeal of all laws restricting voluntary birth control or voluntary termination of pregnancies during their first hundred days.”

After the votes were counted the Supreme Court ruled in Roe v Wade:

“(a) For the stage prior to approximately the end of the first trimester, the abortion decision and its effectuation must be left to the medical judgment of the pregnant woman’s attending physician. …”

The Republicans and their mentors, the Prohibition Party, had by next election composed another Force Amendment to undo the Supreme Court’s repudiation of the Comstock laws they’d managed to get past the Reconstruction Congress in 1873. This demand for a force Amendment has been parroted for 45 years, since the first election following the Roe v. Wade decision. The 2016 version recites:

“We support a human life amendment to the Constitution and legislation to make clear that the Fourteenth Amendment’s protections apply to children before birth.”

The Prohibition party has dropped this plank and opted to instead support the Gospel of Global Warming. But like Rumanian communism or an Orwellian Inner Party, the Republican party faithful look at the Fourteenth Amendment’s “All persons born” and see instead “All ova fertilized…”. No clearer example of the self-deception that forms the basis of totalitarian altruism has ever been presented.

If in need of a multilingual researcher of legal, financial and political topics, seek out a libertarian translator or two.

Feel free to visit my other blog.