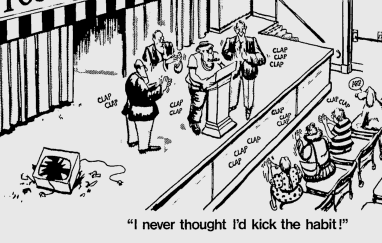 Translation has to do with the meaning of concepts encoded as language for transmission. If the receiver does not comprehend meanings, the signal fails to impart information. Pertinent questions make this clearer.

What is force?
What is energy?
What is Work?
What is power?

The response in most cases is either bovine incomprehension or a frantic outpouring of gibberish. Every one of the answers requires familiarity with dimensions of mass, length and time and interrelatedness of their units not easily mastered without some effort, typically near the age of suffrage.

Now ask anyone who wants to abridge, infringe, restrict or regulate individual rights:

What is government?
What is freedom?
What is a right?
What is political power?

And the response is again bafflement or barking. Indeed, the very act of asking anyone committed to the initiation of force a simple question immediately elicits suspicion. A robber, kidnapper or thief rightly fears prosecution, and the first thing a prosecutor does is ask questions. Similarly a stupid lout even fears questions on a test sheet for fear of being confronted with its own ignorance. Self-deception is key to imagining that you can initiate the use of force against others and gain by it.

Ask freedom-divvying kleptocracy voters (the 96%) those eight questions. The ones with any notion of energy, work and power have less inclination to send men with guns to beat you out of your earnings because of “inequality” or impending doom by electrical stations you should fear, not examine. But they can be enlisted in a witch-hunt against birth control or personally enjoyable plant leaves.

The ones that grasp some notions of government, rights and political power but balk at physical reality are easily convinced that the End is Nigh because of an insufficiency of taxation and related government coercion. This lot is always ready to send armed men to ban electrical generating plants or try to repeal the Second Amendment. Republican, Democrat, Communist and Green voters can be counted on to get most of those questions as wrong as 2+2=5.

But if you ask a Libertarian–someone who actually pays dues and votes–chances you will get meaningful answers to most of those questions. As a kicker, you might ask: By what standard shall we distinguish between right and wrong?

For translations that convey information in its original meaning, look for a degreed and certified professional willing to show you the evidence.

Much of the political strife of the Prohibition era, and its economic consequences, are covered in Prohibition and The Crash–Cause and Effect in 1929. Live on Amazon Kindle in two languages