The Kleptocracy divides into two factions based mainly on who gets the pelf and the paychecks. Because they strive to finagle votes from the same voting population, they are as alike in platforms and positions as teevee stations in a regulated oligopsony. A rogue party is as disrupting as a pirate station.

This is old hat to looter gerontocracies. The Prohibition party, fueled by Dodge, Rockefeller, Morgan and Vanderbilt donations, sought the violence of sumptuary law. The proto-libertarian Personal Liberty League formed to resist in 1883 but was outgunned. Lobbies are no match for parties when it comes to determining the direction in which government service pistols are to be pointed.

John Sherman, whose brother had Marched Across Georgia, warned mystical fanatics “not to throw their votes away.” But communist Greenbackers carefully avoided mention of temperance-at-gunpoint, and looter parties generally dismissed prohibition as something they’d support IF… (there followed a list of qualifiers that cheerfully enraged the Methodist White Terror). Soon communists were writing tax planks for the Democrats just as mystical prohibitionists began dictating dry planks to Republican platform committees.

The Sixteenth Amendment embodies plank 2 of the Communist Manifesto while the 18th and 21st presume to empower men with guns to shoot people over sugar, yeast, grapes, plant leaves and anything mildly enjoyable or likely to reduce human suffering. 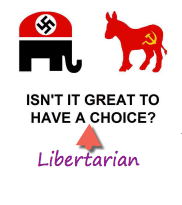 Both of these constitutional Amendments–AND the victimless crime laws that imprison far and away more people than all combined crimes violative of rights–were passed at the behest of two tiny, fanatical, but consistent and dedicated political parties. Together they elected practically nobody and between them hardly ever garnered 3% of the popular vote. But they were a thorn in the side of the Janus-faced communism of pelf that cares about nothing other than its snout in the trough and hand in the till. THAT changed the laws and Constitution!

The irresponsible cupidity of the entrenched kleptocracy was what allowed this despoiling of freedom. But today’s prevailing rule of terror is being reversed by the 3% of votes earned (and proud candidates elected) by the Libertarian Party–to the extent that its platform is not deliberately sullied with counterproductive nonsense.

If in need of simultaneous political interpreting, do get in touch.