You can find the originals at Google News Archives

Two years earlier a communist manifesto People’s Party won 9% of the vote in These States, including 22 electoral votes and almost enough popular votes to THRICE cover the gap between hired and fired parties. That was clout enough to breathe new life into European communo-fascist socialist collectives that multiplied like mice in a monarchy. 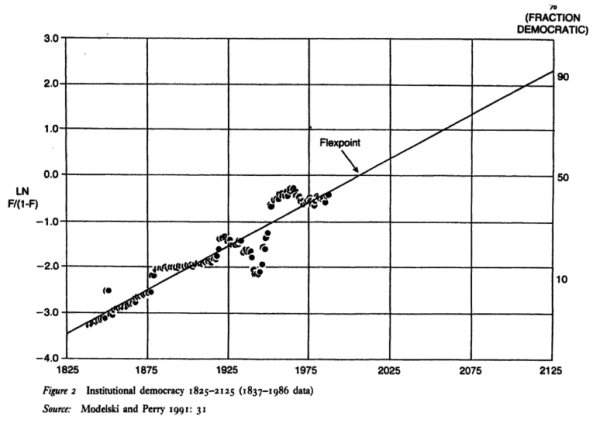 Monarchies were on their way out, substituted by democracies in tight correlation with the Fisher-Pry sigmoid curve that maps the rate at which one product or political party replaces another. The graph above is on semi-log axes convenient before cheap computers replaced adding machines and slide rules. When both axes are linear these replacement curves are an S-shape to which newcomers, like cellphones or the Libertarian Party, enter at 0% of market share, accelerate to 50%, then taper up asymptotic to the 100% mark until replaced by something better. Below is how law-changing LP spoiler vote clout is growing now, with no anarchist planks to make us look bad.

So you see that the game is played by gradual replacement that accelerates if the new product offering is better than the competition’s. Just such a hockey stick increase in 1892 caused the entrenched parties to adopt socialist planks so as to not lose the votes they needed to replace each other. Most problems resulted from those socialist and religious fanatic Comstock, prohibition, sumptuary, blue, Sunday, tax and tariff laws containing social engineering agendas. The Libertarian Party is simply reversing that trend by replacing coercion with freedom using the law-changing clout of spoiler votes.

If the kleptocracy could get rid of us by packing our platform committee with anarchists, girl-bullying zealots or child molesters, they’d do it in a heartbeat to keep the bait planks that attract single-issue fanatics. But we’re still here, and still vigilant after 48 years of finally learning to use spoiler votes to play the looters till they repeal the cruelest laws.

To understand how the Liberal Party unseated the economy-destroying Republicans using these tactics in 1931, see Prohibition and The Crash–Cause and Effect in 1929. For the cost of a pint you will understand how cruel fanaticism destroys economies. Live on Amazon Kindle.

Brought to you by

One thought on “Populist anarchism, 1894”