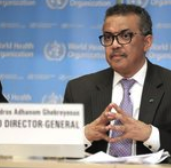 Q: How many Ethiopians does it take to infiltrate a political organization and turn it into a socialist collaborationism platform?

A: No true Ethiopian would help a murdering dictatorship bully the Chinese Islands of Hong Kong and Taiwan–much less infect the entire planet with shocking dereliction in the handling of bio-weapons. No true Chinaman would either.

It takes only one initiation-of-force collaborationist to accept U.S. tax dollars while helping communism attack its peaceful Chinese neighbors, Taiwan and Hong Kong–and cover up communist dereliction in the handling of bio-weapons. It takes American tax dollars to sanction and empower slavers on such a dangerous and devastating scale. (link)

The European National Socialist Union of course recognizes a comrade and ally in altruist aggression. The WHO has clogged its organization with Taiwan deniers, Hong Kong holocaust apologists, and carbon tax pseudoscientists of the looter persuasion. (link) Just as Europeans eagerly crouched to lick the blacking off of Hitler’s, then Stalin’s boots while welching on war loans, so they perform with Red dictators in attacks on Taiwan and Hong Kong–the real Chinas. Let the fake China take its turn at funding its own puppet–and the Ethiopian People’s Revolutionary Democratic Front as well. (link)

Solution: NOT A PENNY! Not a penny of money extorted from individual Americans via Communist Manifesto Plank 2 (in the guise of the 16th Amendment) needs to go to propagandists for totalitarian bullies. In the 2016 election campaign the soi disant “Socialist Action” platform demanded “Not a penny for war!” (link) What they meant was not a penny for the initiation of force, for that is the root of all wars. (link)