The clipping is from when HUAC was praised as a good thing because it investigated baaad Christian National Socialists rather than goood communist socialists. I personally am all in favor of destructive Antifa saboteurs spitting in the faces of armed border guards. I expect to be delighted as a spectator to the outcome–provided only that the infiltrating saboteur does not claim to represent the Libertarian Party. 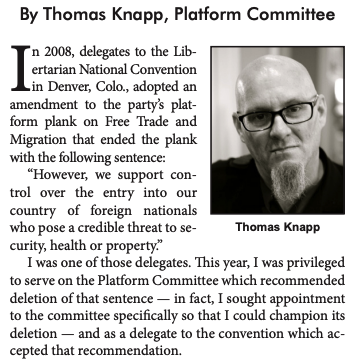 But alas, such is not the case.(link) The same infatuated public-mind-reader who attacks the reasonably good migration plank we had in 2008 and 2016–when LP vote share ROSE by a factor of 3.28–is doubling down. The LP Platform Committee’s version of Josef Belohlavek now demands that “we” endorse uninspected entry of malcontents from every brainwashed dictatorship and People’s State, nevermind the corona virus, ebola carriers, wanted murderers, or religious berserkers in suicide vests.

This has to seem like some sort of overstatement or mischaracterization. PLEASE read it in the words of the “libertarian” whose feelings determine what laws we seek–not to repeal so much as to urge others to violate.(link) In the real world I handle stories of poor miserable wretches lured into detention and deportation proceedings after being urged to simply invade without permission and tell a hard luck story. The Migration plank (which in 2016 helped us earn 4 MILLION votes) needs to say:

… Political freedom and escape from tyranny demand that individuals not be unreasonably constrained by government in the crossing of political boundaries. Economic freedom demands the unrestricted movement of human as well as financial capital across national borders. However, we support control over the entry into our country of foreign nationals who pose a credible threat to security, health or property.

The omitted first sentence is counterproductive package-dealing. Terrorism and communicable disease entry, like the dropping of aerial bombs, are NOT free trade.

Thomas Knapp and everyone else on the platform committee who participated in the mutilation and disfigurement of what in 2016 was an attractive Migration plank need to RESIGN and volunteer for something constructive–like running for office and meeting voters. Thanks to them I no longer donate over and above dues to the National LP. Other Libertarians revolted by sabotage planks are deserting the national party to support state and local party organizations instead–or returning to the Kleptocracy in disgust. As in 1982, the National LP has succumbed to the pressure of hostile infiltrators out to see to it that LP spoiler votes shall not compete with the Kleptocracy.(link) The best way to accomplish this is add backstabbing planks to make us look like allies and abettors of parasites and provocateurs.

Why do refugees flee Statesward? Because the Republican Party’s 1928 Good Neighbor Policy began the exportation of the fanatical prohibitionism that brought on the Crash and left the US economy smoldering in the Great Depression. Prohibition and The Crash–Cause and Effect in 1929, explains how looter fanatic agents raiding banks in a fractional-reserve monetary structure SHRINK economies here, there and everywhere into black holes of banking panics and liquidity crises. LIVE on Amazon Kindle in 2 languages.