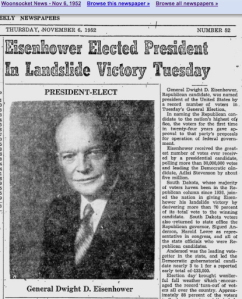 Ayn Rand recognized The New Left as The Anti-Industrial Revolution in 1971. The Nixon Administration was busy completing the task of injecting German National Socialism into American ideology. So, that same year David Nolan went ahead with formation of a Libertarian Party to counteract the twin totalitarian trends of the 1930s.

The Libertarian Party threatened the Christian National Socialism Republicans had successfully imported after Herbert Hooverville’s destruction of the economy and their crony mercantilist-cum-prohibitionist party. It took another 24 years to elect the German-descended, non-teetotalitarian soldier who “defeated Hitler,” and even then only out of fear of the communist faith in Korea, a faith the Delano and Roosevelt dynasties had unwittingly boosted by abetting Britain’s Opium Wars.

But Ike’s coattails also dragged in Richard Nixon–the embodiment of the Waffen military-industrial complex grafted onto These States. Nixon acted to crush the Libertarian Party within 24 hours of its formation. Americans promptly got the Weathermen, Symbionese Liberation Front and Black and Grey panthers instead.

Predatory mercantilism backed by nationalsocialism is coercive and therefore unstable, just as all socialism is unstable. It’s 99 years since soviet socialism began murdering people, and the Dems still worship those ideas just as God’s Own Prohibitionists worship the more Germanic and christianized version of the same thing.

Spoiler votes interfere with entrenched parties getting “their” henchmen into government jobs and paychecks. For this reason third party votes are extremely powerful tools. But the 1952 threat of Chinese international socialist (communist) military victory in Korea completely drowned out Progressive and Prohibition Party voter support (0,2%, 0,1%) that election. With virtually no spoiler votes, Ike became the first Republican victory since 1928. That was the year the GO-Pee was completely taken over by Klansmen and Prohibitionists.

This latest election proved National Socialism and crony mercantilism are still popular, but totalitarian prohibitionism is fading fast after George Waffen Bush‘s asset-forfeiture prohibitionism again turned These States into Hoovervilles in 2007. The Gaia-worshipping version of totalitarian collectivism–gulped hook, line and sinker by the Dems after their Y2k rout by Green spoiler votes–was co-opted and manipulated a little too visibly by Chinese totalitarians. Genuine scientists like Rudy Heller exposed the fraud behind the political Greeligion, and intellectuals of the looter persuasion, innocent of physics and math, will never understand that the world was becoming cooler while venal frauds and data falsifiers falsified simple facts.

Now, like Millerites on October 23, 1844, Democrats are shocked, disappointed, bewildered, but still suckers. Their own false superstition born of predatory socialism led them to conclusions demonstrably WRONG to anyone who can read a thermometer and plot a curve. Trump won. There went their chances of leeching off of others without first producing faith-based credentials. There too went many of the libertarian-gained rights women hoped to hang onto. 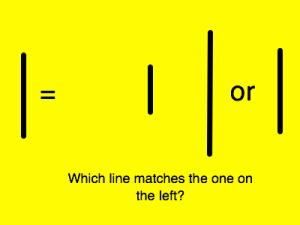 The Solomon Asch Experiment proved with the finality of a physics lab that 3/4 of educated Americans will lie about the length of a line just to go along with a crowd. That makes them easy prey for Republicans, Democrats and other coercive demagogues. This measured aspect of ordinary human nature makes it all the more crucial that those able to reason by reality exercise integrity and judgment in voting and discussing platform planks. Only one in four individuals is resistant to the influence of social pressure in overriding objective individual judgment.

The experiment asked an individual to say which of three lines matched an original line off to the side. With no prompting, booing or hissing, three out of four ordinary college students lied rather than tell the truth to make their answer like everyone else’s. Two out of three do this consistently on average.  The same experiment also proved that a lone dissenter was enough to improve objectivity of choice by a solid 25% (p. 6).

Every time I vote libertarian I am mathematically certain that I am changing bad laws 6 to 36 (or 10,000 as in 1972) times as effectively as the same-old-kleptocracy alternative. When others puzzle at my bumper sticker or see my previous LP votes recorded in history, they will shed 25% of the cowardice that keeps them from passing independent judgment. This spoiler vote effect is a win-win situation for me, just as opposing the libertarian platform planks is a lose-lose proposition for prohibitionist kleptocracy candidates. Libertarian candidate Gary Johnson (just one among the hundreds of LP candidates running in this election) is now polling HIGHER than the entire US Congress!

The Prohibition Party sets the agenda for the GOP, and the Communist Party USA sets the agenda for the Democratic Party. Visit their websites and see. There is but one nonviolent way to counteract their social pressure guiding application of the force of law as deadly coercion. That option is to support the political party that defends individual rights rather than drink the cyanide Kool-Aid altruism pushed by stale ideologies of Left and Right. Are these the people you want making decisions about government use of force on YOU?

If this helped you understand how bad policy decisions are made, remember that next time you need a translator.