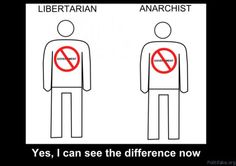 Do you know the difference between a libertarian and an anarchist?

A libertarian acts to minimize the initiation of force.

An anarchist seeks to maximize the initiation of force by cross-dressing as a libertarian and spitting in voters’ faces.