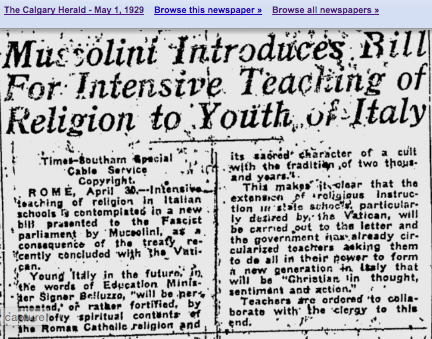 Five months before the Crash, the market’s reaction to the certainty of the impending Great Depression, Winston Churchill was still sweet on Mussolini, who had allowed faith-based conditioning of students into government schools. But that can’t happen here, right? What George Bush did after his reelection was nothing like Italian Fascism, right? See Bush Jr. Executive Order 13198 (link)

You tell me. The Canadian clipping above says:

Mussolini Introduces Bill For Intensive Teaching of Religion to Youth of Italy… ROME, April 30 (1929)–Intensive teaching of Religion in Italian schools is contemplated in a new bill presented to the Fascist parliament by Mussolini, as a consequence of the treaty recently concluded with the Vatican.
Young Italy in the future, in the words of education Minister Signor Belluzzo, “will be permitted, or rather fortified, by the lofty spiritual contents of the Roman Catholic religion and its sacred character of a cult with the tradition of two thousand years,”
This makes it clear that the extension of religious instruction in state schools, particularly desired by the Vatican, will be carried out to the letter and the government has already circularized teachers asking them to do all in their power to form a new generation in Italy that will be “Christian in thought, sentiment and action.”
Teachers are ordered to collaborate with the clergy to this end.

Go to Google News Archives for the Calgary Herald (link) for the original in context.

If that is reminiscent of Bush dynasty perpetuation of Republican asset-forfeiture prohibitionism, or of the tone and tenor of this newspaper (link), welcome to The Ominous Parallels. Right now is a good time for the Libertarian Party to stop encouraging invasions by uninspected entry, and to stand up, as we did in 1972, for the individual rights of women. (link) (link)

Democrats who would prefer John F Kennedy to Kruschev, Ceauscescu, Castro, Maduro, Kim Jong-un, Xi Jinping, Bernie, Biden, Pocahontas or the like could perhaps be persuaded to cast libertarian spoiler votes in 2020–rather than waste suffrage on the brainwashees of totalitarian dogma. Voting Libertarian does not endorse any form of fascism, and the leveraged effect is stupendous.(link) When Nixon was elected a thimbleful of hemp seeds was cause for stripping an 18-year-old of all property AND a two-year term in prison.

Get the juicy details behind the mother of all economic collapses. Prohibition and The Crash–Cause and Effect in 1929 is available in two languages on Amazon Kindle, each at the cost of a pint of craft beer. 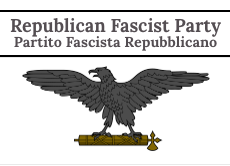 To guard against foreign involvement in our elections, we call for vigilance regarding online credit card contributions to candidates and campaigns.

(By vigilance they mean the violence of law.)

The result so far has been to infiltrate and intimidate local Libertarian parties to stop expatriate American citizens abroad from voting, paying dues or making a voluntary libertarian party donation via Paypal. Since this plank was published, then embellished by rumors of US elections being influenced by countries “we” subsidize, hate, invade or bomb, Internet Service Providers have gleefully blocked credit card submissions originating through ISPs outside of These Sovereign States and Dominions. The Libertarian Party of Texas has been infiltrated by Republican saboteurs to the point of turning away prospective members eager to sign the NAP and pay dues.

But is this even consistent? What about using taxation to rob foreign visa holders in America, then forcing them to support entrenched mixed-economy fascist and socialist parties? Nixon’s 1971 anti-Libertarian law says:

“SECTION 9004. ENTITLEMENT OF ELIGIBLE CANDIDATES TO PAYMENTS.
“(a) IN GENERAL. – Subject to the provisions of this chapter –
“(1) The eligible candidates of a major party in a presidential election shall be entitled to payments under section 9006 equal in the aggregate to $0.15 multiplied by the total number of residents within the United States who have attained the age of 18, as determined by the Bureau of the Census, as of the first day of June of the year preceding the year of the presidential election. (…)

Before their anti-energy candidate lost, the Dems were all gung-ho on opening up DATA borders. Their lengthy 2016 platform said:

We will increase access to global markets for American intellectual property and other digital trade by opposing quotas, discriminatory measures, and data localization requirements.

That was then, and this is now, and you can no longer order software from Amazon to be delivered within the borders of allied nations.  The Nixon anti-Libertarian law transfers your money to the media on a scale proportional to the number of dupes suckered by that looter party. Why? To take sides in election campaigns and strive to crush the one party that wants an objective, unsubsidized playing field for all parties and candidates.

Amazon will sell you a copy of Prohibition and The Crash outside US borders in Kindle format, and in your choice of English or Portuguese. Find out how the two parties that ratified the Prohibition Amendment and the Communist Manifesto Income Tax Amendment wrecked the economy, caused the Great Depression and helped bring Hitler’s, Franco’s and Mussolini’s parties to power in Europe.

Prohibition and The Crash, on Amazon Kindle, choice of 2 languages 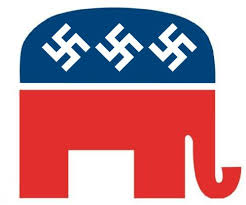 The key to political campaigns is in the definition of winning. Suppose someone wanted his son shot and jailed, home confiscated, unemployment up, and all markets crashed, you’d suggest he vote Republican. Same solution if they were to want a daughter to bleed to death because of medieval approaches to accidental pregnancy. To Republican, Christian National Socialist and Islamic State legislators that’s winning–provided their candidate also gets the government job. Communists and lay socialists on the other hand prefer to forego the government job but force the kleptocracy to change the laws in response to the pressure of their spoiler votes. It’s kind of like a “sacrifice” move in a chess game, in exchange for gaining tactical or positional compensation farther along. So if their platform planks seem “extreme” (meaning consistent with their ideology), that’s not a problem. Spoiler votes will gradually make those positions seem wearily centrist. That’s the strategy that enacted the 16th and 18th Amendments. 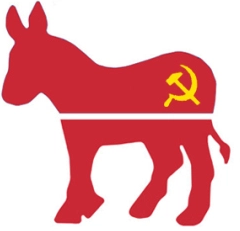 When socialist parties lose, it’s because (their cheerleaders feel) that particular unverifiable secret ballot election was rigged. Deep down you know this is true–or at least unfalsifiable–so the tendency is to feel a twinge of sympathy for the raw deal they got. But it’s not just ordinary socialists. Christian National Socialists, Islamic Mohammedans and devout altruistic Communists all want essentially the same thing: decisions imposed at gunpoint by the better people who know what’s good for the riff-raff. Of course they have surrogates. National Socialists of Third Reich Christian persuasions have since 1932 been the hand inside the Republican party sockpuppet. International Socialists of the East German Communist variety have lately pulled the strings that move the arms and mouths of Democratic Party spokesmen. One can’t think independently and still have faith in altruism.

But suppose a voter wants freedom? That is, not the initiation of force, but rather, voluntary cooperation? Suppose you want the Marxist personal income tax abolished, its collectors disarmed and returned to the productive labor market? What about those who want to eat, drink and smoke what they prefer–people to whom winning means becoming the masters of their own financial decisions? 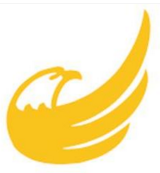 Not a Fake Trump combover!

In that case, the recommendation can only be to vote for the LP platform Gary Johnson is standing on. It is easy to verify that, as in 1892 or 1908, each third-party spoiler vote has way more law changing power than a vote wasted on shape-shifting actors fronting for soft machines. Dry Christian Progressives backing small parties in the 1890s paved the way for Prohibition making light beer a felony. Likewise, dry Christian Socialists paved the way for Soviet Communism in Russia, National Socialism in Germany, and transfer payments to non-producers elsewhere. Yet all their parties–Greenback, Farmer-labor, Anti-monopoly, Socialist, Socialist labor, Prohibition, LOST by their candidates getting less than half the electoral vote. However, they eventually won what they wanted by changing the laws, whether through enactment, court decisions, or repeal.

I’d wager that even if Gary Johnson were to receive 60% of the votes, a way would be found to defraud the election. But the fright would nevertheless cause the looters to abolish a mess of bad laws–which is what I really want. THAT’s winning. Consider making a Paypal donation at LP.org I absolutely guarantee your donation will change 600% to 3600% as many words in laws as it would if wasted on either of the Kleptocracy soft machines.