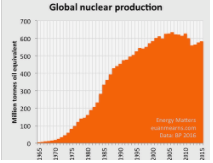 Remember in physics how force x distance is Work? And the rate at which the work is done is Power?

John Hospers, the first Libertarian Party candidate for President, then an organizer of the Libertarian Defense Caucus gave a definition of economic power in his book Libertarianism (link)

Economic power is simply the right under freedom to refuse to make an exchange.

It is the power to produce and to trade what one has produced.

She went on to explain that:

Political power is exercised by means of a negative, by the threat of punishment, injury, imprisonment, destruction.

To politicians and weapons designers, political power is the rate at which disobedient citizens or foreign aggressors (or both) can be transformed into cadavers. It is the line integral of harmful and deadly force over whatever distance is needed within a timeframe important to them.

So next time you cast a vote, look at the ballot and notice that of the three options you have, only Libertarian Party candidate Jo Jorgensen offers you the opportunity to vote AGAINST the initiation of deadly force required by the increase of political power. That same option enables you to vote FOR the increase in freedom that means the same thing as the reduction of coercive force. It also means an economy less threatened by prohibitionist asset-forfeiture crashes, collapses and Depressions.

THIS is the either-or. The Republicans and Democrats BOTH want your sanction to beat the other looter so they can rob and coerce you with less interference. Only by voting Libertarian can you go on the historical record and figure in important statistical curve plots as being FOR the increase of freedom and AGAINST coercion.

This is the ethical decision, the choice between right and wrong, now placed before you. Germans made the wrong choice in 1933 by voting for a politician. The Japanese, Russians and Italians made similar mistakes in their choice of men while ignoring the laws of physics and ethical distinctions popular candidates urged them to ignore.