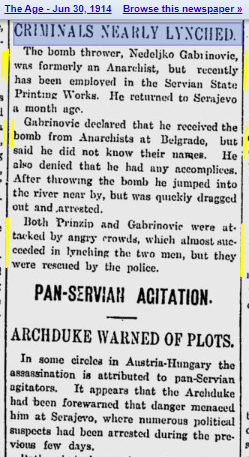 A 2014 movie Das Attentat, americanized in translation as Sarajevo, tells a fictionalized version of the routine murder of a government big-shot by youthful dupes enthralled with communist anarchism. Why routine? Hardly a week went by without some collectivist or other trying to murder a mercantilist, politician or royalty.  The German-language movie on Netflix and Youtube seeks to convince the viewer that The Accursed Hun plotted and paid for the assassination for the payoff in railroad stocks for a rail line through Serbia/Servia.

Omitted from mention were the two time bombs hidden under the table at which the Archduke and Duchess Sophia were to have lunch–had not an anarchist bomb and gunshots intervened. Bombs in the chimney at another nearby eatery were also left out, along with the seven being smuggled by a woman in the neighborhood.(link) But the entire region had seen nothing but violence for the past four years.

Political violence was unremarkable for the opium-farming region of Bosnia at the time, and socialists and mercantilists routinely killed each other. But the important detail was that the Chinese revolt of 1911 had blocked dumping of morphine there. This meant that unshipped opium grown in the Balkans and refined in Austro-Hungary, Germany, Prussia, France, Italy and Holland began to accumulate in a heroin and morphine glut. The Balkan States promptly attacked their competitor, Turkey, then flew at each other’s throats with 240,000 killed amid looting, rapine, arson, starvation, disease, mutilation and religious genocide until August 10, 1913. 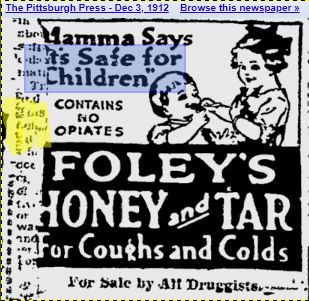 Another unmentioned detail was the Hague Opium Convention. This had been building since 1909 in a U.S.-led effort to stop the dumping of morphine in China and other Asian and African nations formalized . The Final Protocol of the Third International Opium Conference was signed at the Hague June 25, 1914 by former U.S. Minister to China, former Philippine commissioner and then-current Consul General at Vienna, Austria, Mr. Charles Denby, and also by M.A.A. de Jongh, former inspector general, head of the opium monopoly in the Dutch Indies (at the time also a major source of cocaine).

This June signing began the ninth inning of years of signature-gathering.  At a series of meetings beginning June 15, Conference attendees resolved that the Convention would come into force between all the signatory powers as soon as existing signatory powers and enough others had ratified it. Enforcement was expected to begin by December 31st, 1914. Instead, the Austrian Archduke and consort were assassinated three days after the preliminary signings, on June 28th, 1914.

Opium producers and refiners were thus saved by the bell when “former” anarchist Gabrinovic and his buddies carried out the assassinations.  Sir Edward Gray proposed a convention on problems in the Balkans, and on Black Saturday, July 25, all European securities markets crashed. Three days later President Woodrow Wilson decreed that under the newly-enacted income tax, returns filed by corporations would be public records open to inspection by State revenue agents of States with an income tax. U.S. stock markets immediately crashed and were shut down. They did not reopen for a long time because Austria also chose that very day to attack Serbia/Servia.

Word War I is also on the list of reasons voters are not attracted by anarchists. It is among the myriad reasons adding anarcho- to libertarian or capitalist (a 1972 smear tactic) does nothing but convince voters we are a band of bomb-hurling communists, just like every other anarchist that has ever made the news in any language.

Why not delve into the failure of Prohibitionism that caused the 1929 Crash? Prohibition and The Crash–Cause and Effect in 1929 does exactly that, matching newspaper accounts against stock market reactions and competing theories. It is live on Amazon Kindle for the price of a pint.

China’s republican revolution overthrowing the Quing Dynasty and restoring antiopium prohibition in 1911-12 caused a massive opiate glut. Withdrawal sickness, often medicated with alcohol as a palliative, blurred the distinction between opiate addiction and fascination with alcohol before and during the World War. The war itself was sparked by the glut in opium-producing Balkan nations and morphine-refining Austria-Hungary, Germany, France and England as pressure mounted to ratify the Hague convention. Mr Dooley, a humorous political philosopher quoted by Milton Friedman, reported surplus morphine being added to distilled spirits during the depression begun in 1907. (link)

After the Great War, the Hague antiopium convention set afoot in 1909 was finally ratified at bayonet-point as part of the Armistice and Treaty of Versailles. With President Wilson’s corporate income tax inspections as public records announcement of July 28, 1914, wheat dropped and many stock markets closed. A sharp panic and depression attended federal enforcement of Volstead prohibition beginning the night of January 16th, as coercion and banking problems spread across These States. 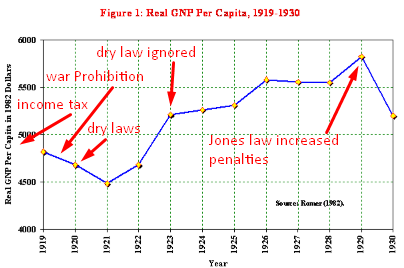 Canada had experienced a similar narcotic shock, and many provinces had adopted prohibition laws after the pattern of U.S. States during wartime conditions. A black market busily reallocated supply and demand, and with the return to peacetime normalcy much churchly legislation hastily enacted in the heat of war revealed itself a financial burden.

Within a few years most provinces repealed Prohibition: Quebec, British Columbia and the Yukon in 1921, Manitoba in 1923, Alberta in 1924, Saskatchewan in 1925, New Brunswick and Ontario in 1927 and 1929, and Nova Scotia in 1930. Iceland modified its dry law to admit Spanish wine, and even Russia legalized beer and vodka as violent anarchy alternated with deliberate mass murder.

A similar trend occurred in the USA, beginning with repeal of New York’s Mullen-Gage Act, to which womanizing druggie President Harding retorted that a “small and a greatly mistaken minority” imagined prohibition would be repealed. Yet Turkish authorities were busily repealing curbs on narcotics in April 1923. The 1924 Democratic platform expressed shock and dismay at the way narcotics had replaced beer.

Get the complete story in Prohibition and The Crash on Amazon Kindle in two languages. After this you’ll be able to explain to economists exactly how fanaticism and loss of freedom wrecked the U.S. economy.