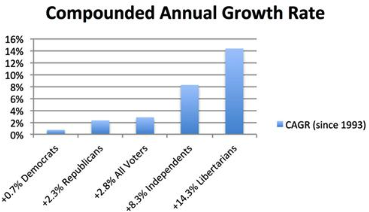 by Brad Hessel, copied from their Facebook page
Another year, another new all-time record for the Libertarian Party of North Carolina.

The 2019 purge was the second biggest in the last 26 years (as far back as our annual data go), exceeded only by a 5% reduction in the voter rolls in 2001. The declines were the worst ever for the Ds, second worst ever for the Us, and tied for second worst for the Rs during that time span. It was also the slowest annual growth rate recorded for the LPNC (excepting the three years we were off the ballot, the number of registered Ls in NC has never declined year-over-year).

Bucking the trend were the two new parties: the number of Green party members was up 90% in 2019 to 1,938 and the Constitutionalists did even better, up 217% to 2,786. The Greens—who had a head start in 2018—started the year ahead of the Constitutionalists, but are now decidedly eating the latters’ dust.

Looking at the entire quarter century, the LPNC continues to lead the pack with a robust compounded annual growth rate of 14% compared to 8% for independents, 2% for Republicans, and 1% for Democrats. The Rs and Ds are consistently failing to keep pace with the overall 3% CAGR for the number of voters. The Democrats have grown slower/declined faster than the overall number of voters 25 out of the last 26 years, only beating the average in 2008 thanks to Barack Obama. The Republicans have beaten the average 11 times…but their last win was in 2004 and they are currently on a 15-year losing streak.

Libertarian organizations like the NCLP are what brought us the pro-choice hockey stick vote share growth tracked by Fisher-Pry and other logistic growth curves. 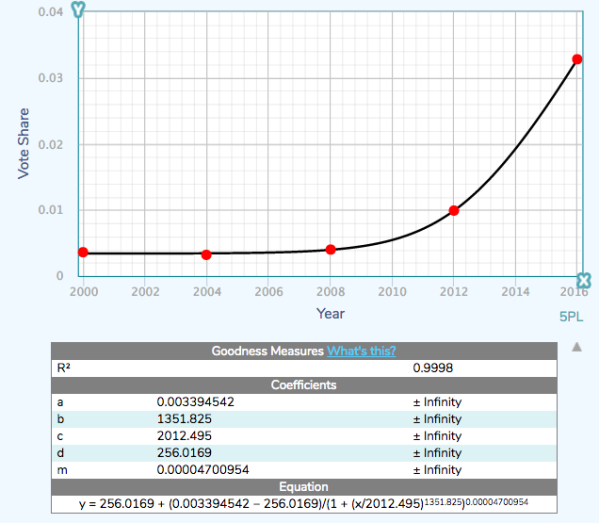 History shows us that a growing small party gets its platform plagiarized by both halves of the entrenched kleptocracy. Every time votes flow away from a decayed and derelict political party, its swineherds get the message no amount of self-deception can distort.  Laws change as a result. The technical term for causing the looters to change bad laws is winning.

Find out the juicy details behind the mother of all economic collapses, and how its causes changed the laws. Prohibition and The Crash–Cause and Effect in 1929 is available in two languages on Amazon Kindle, each at the cost of a pint of craft beer.