A Reason Magazine article on the disputed definition of milk brought to mind the facts behind the Panic of 1907. (link)

The Pure Food Law passed in 1906, three years after the Silent Panic brought on by a Chinese boycott of American products. The boycott–three years after the Boxer Rebellion failed to exclude foreign morphine and needles from prohibitionist China–got the attention of U.S. industrialists and bankers and the mixed-economy politicians they owned and controlled. British baby syrup had Poison, Morphine written on the labels, and that made them comparatively honest and straightforward by Chinese standards. The Pure Food law only became enforceable in 1907, the Year of the Panic. This was the year of a Great Awakening in China, as Draconian measures were afoot in a War on Poppies.

Theodore Roosevelt’s inherited fortune and guilt came from American participation in selling opium in China. Once promoted by assassination to the Presidency, the former Police Commissioner who had served the Comstockers and Anti-Vice societies as muscle to enforce Sunday closing of New York Saloons set out to put the Teeth into Temperance. Industrial alcohol would be excise-tax-free, provided poison were added to sicken, blind and/or kill any who drink it.

Bureau of Chemistry guru Wiley chose a pharmacopoeia definition of whiskey and wrote a Decision to make it binding.  Countering government chemist Wiley, Attorney‑General Bonaparte differed as to the Revealed definition of “whiskey” and offered his own alternatives:

The gauntlet was flung, the challenge accepted, and so began one of many parallel legal battles whose first casualty would be the American banking system and economy. 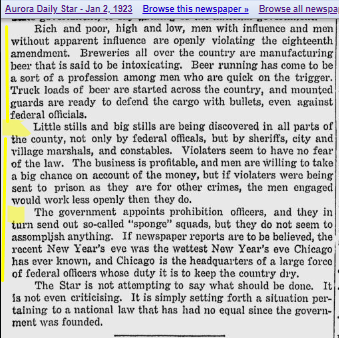 Stock markets began falling in 1916, despite War profits, because investors feared the approach of national Prohibition. Prohibitionist States had never been beacons of economic success–rather the contrary. The Crash arrived with the Volstead act the night of January 16th, 1920, and sure enough, the depression arrived. Yet two years later a fairly swift recovery had set in, (link) mainly on account of popular nullification. (link)

This changed radically after the fanatically dry Ku-Klux Klan abandoned the Democratic party after “Whiskey Al” smith ran for president in 1928. Back then inauguration day was March 4th, and by March 2, the lame-duck Congress had gotten president Coolidge to sign the Jones Five & Ten law making beer a federal felony good for 5 years in the slammer and over half a million dollars in fines at current gold prices. With typical American humor Illinois papers that gloomily predicted a Dry Autocracy were soon advertising (non-Irish) Autocrat coffee. (link) 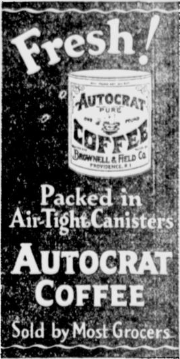 Federal Prosecutor Willebrandt had meanwhile weakened 4th and 5th Amendment protection to make way for really enforcing the first coercive amendments to the Constitution–the 16th importing the communist platform graduated income tax and the 18th, jointly yielding to the mystical fanaticism that loosed the Comstock Laws, Panic of 1893 and Panic of 1907–as apocalyptic plagues upon the former Land of the Free. Her tell-all exposé was published in August and September, 1929, as a syndicated column titled “The Inside of Prohibition.” (link)

Luckily for America, we still had unsubsidized elections and the Liberal Party’s 1931 repeal plank was published in time for the Democrats to copy it into their 1932 platform. (link) After Republican asset forfeiture enforcement brought on a Great Depression and Hoover’s Moratorium on Brains helped Hitler gain power in Germany, that wet plank walloped God’s Own Prohibitionists right out of the ballpark for the next five elections. (link)

Get the complete story in Prohibition and The Crash on Amazon Kindle in two languages. After this you’ll be able to explain to economists exactly how fanaticism and loss of freedom wrecked the U.S. economy. 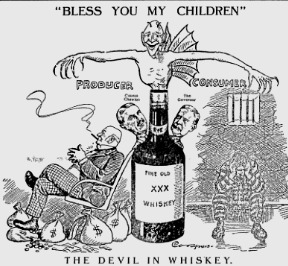 Settled science in 1913 took for a fact that whiskey–like guns and automobiles–killed people and was a major worsener of crime statistics. No Constitutional Amendment protected trade and production of intoxicants, and only smoking opium was barred as an import as an example to impress the Chinese. Suggestions were advanced that persons possessed by Satan’s whiskey should be registered by the government.

Concerns were raised, and some obstructionist pettifoggery, but gulping down the potions of Satan was not an enumerated freedom of action protected by the Bill of Rights, and legislation passed amid halelluljas to empower states to coerce common carriers and register users. The rising tide of Godliness lowered all rights and the satanic potion addict registration law joined the Bryanist avalanche of commonsense prohibition and income tax laws and Amendments popular at precisely the time a prohibitionist movement in China was creating an opium glut in Europe and Asia.

And so it was that prohibition laws reestablished their putative hegemony over personal choices while creating demand for opiates recently suppressed. This revival after the terrible setbacks suffered in the Panic of 1907, when the Pure Food and Drug Law of 1906 took effect–and wrecked the economy–was regarded as nothing short of miraculous.

For more about how pseudoscience and prohibitionism cause the collapse of fractional-reserve banking systems, see Prohibition and The Crash–Cause and Effect in 1929. For the cost of a pint you will understand how pseudoscience warped into cruel fanaticism destroys economies. Live on Amazon Kindle.

Prohibition and The Crash,
on Amazon Kindle in 2 languages

Brought to you by 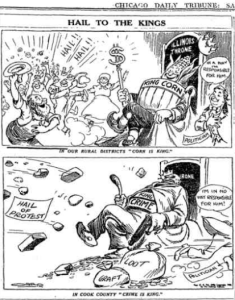 The heat was definitely on, and Chicago bootleggers departed in droves for Miami. The general hysteria began to worry cooler heads, among them the Prohibition Commissioner, Dr. James Doran. A professional chemist and head man in the Federal department charged with enforcing prohibition laws, Dr. Doran knew better than anyone how the liquor traffic operated.

This unfortunate business involving the Hubinger corn sugar factory at Keokuk, and those wealthy Italian entrepreneurs was most distressing. Unfolding, as it was, in the shadow of the Illinois State Capitol, the investigation was fraught with potential for sticky political repercussions if not nicely handled. Chicago bank stocks had been sliding and even the nation’s stock markets were reacting badly. He was also aware of the pressure on Congress to do something foolish, so he boldly ripped the lid off of one of the best-kept secrets in the trade: “Ninety-five per cent of the whiskey consumed in the United States,” he told reporters “is made from corn sugar.” The good doctor then explained how moonshiners discovered that corn sugar was not only several cents a pound cheaper than cane sugar but was far more practical and the primary source of moonshine, with a 95% market share.[1]

At least 25 million bushels of corn were needed to fill 1928 demand for corn sugar, and it was “generally conceded” that the new moonshiner market was a large factor in boosting corn prices. Reporters observed that the dry Middle West corn belt, largely responsible for the enactment of prohibition, owed much of its present measure of prosperity to the widespread violation of that very law. Now the cat was out of the bag, but way too late.

Frustrated for years by arrogant scofflaws, reviled as bigots by the wet press, belittled and shamed in such popular novels as Elmer Gantry, and ridiculed at the Tennessee “Monkey Trial” and elsewhere by the likes of H.L. Mencken, the drys were not going to let pass this opportunity to exploit the famous massacre.

Coming up: The Five and Ten

Read this in Portuguese at my other blog.