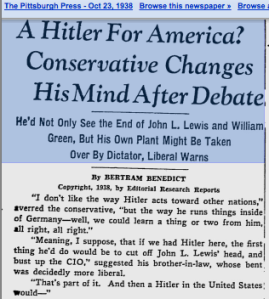 The Republican Party fully embraced prohibition in its 1928 platform. This meant destroying the economy trying to enforce it, then seeking reelection after prohibition enforcement caused the Great Depression. Republicans in 1933 faced disappointment like that of Germany in 1920. They’d stood at Armageddon fighting for the Lord, and been backstabbed by liberals, catholics, Jews and women in the act of winning victory over the myrmidons of Satan, Beer, Big Sugar and the Demon Rum.

True, Germany lost the war for exports of addictive stupefacients. Huge markets fell to Chinese enforcement of narcotics laws, and the U.S. Harrison Tax Act–to say nothing of millions killed and crippled.  Defeated, Germany’s only hope then was to sell enough heroin to stave off economic collapse while building up its capacity to wage war.

The U.S. on the other hand profited greatly from WWI–first by selling foodstuffs and materiél, then from loans at interest to belligerents. But America lost her freedom in the bargain as religious fanatics and communist ideologues fastened upon These States the prohibition and income tax amendments so often tried and discarded. Sugar, glucose and yeast magnates profited from prohibition the way they had from U-boat blockades. Preachers accompanied men with guns on deadly prohibition raids. Condoms, diaphragms and divorce were outlawed, dividends protected from the income tax and investment banks financed smuggling operations.

Federal prosecutor Mabel Walker Willebrant was portrayed by HL Mencken as the Portia of prohibition (after The Merchant of Venice’s heroine prosecuting the money-worshipping Jew). As dry agents Moe and Izzy Einstein dressed as rabbis to buy sacramental wine and arrest the entrapped sellers, Willebrandt chiseled away at the Bill of Rights and reinforced tax law jurisprudence. Rothstein’s drug empire unravelled after gunboats surrounded Florida in 1928.

Al Capone was questioned under federal subpoena,  tonnes of drugs and carloads of alcohol were seized amid bank failures and mass-imprisonment. Herbert Hoover poured prohi and tax agents into Chicago and every major city, eager for asset forfeiture. Prohibition raids resulted in property auctions for tax arrearage,  Fifth Amendment be damned, and the stock market heard a tinkling… the leper’s bell of the approaching looter drew nearer.

Sugar and yeast factories and other giant corporations were indicted for “conspiracy,” meaning wet thoughtcrime. Near Atlantic City practically an entire town–including investment banks, turncoat cops, detectives, Customs and Coast Guard agents and bureaucrats ran a smuggling racket with radio stations and phalanxes of criminal criminal lawyers to run interference. Yes the stock market crashed as money fled the banks ahead of swarms of tax agents.

Republicans were shocked when Pauline Sabin led the women of America against teetotalitarianism–she even compared drys to mohammedans! Federal agents were gunned down as lustily as they had once dished it out. Movies like Frankenstein (the noble experiment gone bad) and Scarface, replaced D.W. Griffith movies that once glorified prohibition, religious and racial bigotry.

Conservatives took consolation in the manly way National Socialist brownshirts beat back unions and the War Against Christianity with common-sense centrist gun control, government dole, Just-Say-No youth movements against homosexuality and immigrants stealing their jobs. “Liberal” became a curse word in America and Germany, a conservative epithet only slightly less vituperative than “anarchist” had been in 1901.

The Liberal Party faded away, and was replaced by the Libertarian Party in 1971, which published its platform in 1972. This is the first viable deviation from the standard choice between communist-leaning Democratic and nationalsocialist-leaning Republican approaches to micromanaging economic decisions and abolishing individual rights.

This message brought to you by Brazilian Translated, legal, financial, mining and agribusiness translations you can bet on.

2 thoughts on “How “liberal” became a Conservative catchword”