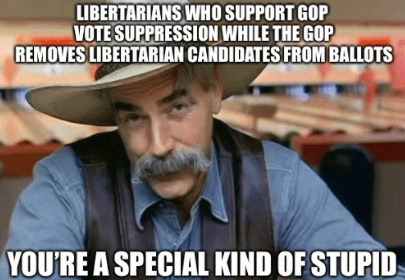 Entrenched looter parties are struggling to keep a lid on libertarian vote counts by pigeonholing us in with asset-forfeiture parties (CPUSA, Green, Constitution, Prohibition, Tea…). For instance, at U. of Virginia–of which Thomas Jefferson was once justly proud–readers of opinion poll entrails put up a smirking election results article out of which the word “Libertarian” has been rectified with Inner Party precision.

The Florida LP missed a spoiler vote opportunity when it shied from running a candidate for the Senate. The Asian-style socialist beat the European-style nationalsocialist by a tenth of a percentage point. Gary Johnson got 2.2% of Florida votes two years ago, so this tight a race would have been easy to reverse into a gain for women with pro-choice LP spoiler votes. The GOP winner is rated 0.0 by NARAL on female individual rights to birth control.

With no Libertarian candidate in the running, that race did reveal that the ratio of votes tallied to partisan voters registered was less than one for both the Republicans (0.86) and Democrats (0.90). Florida, with 28% Non-Kleptocracy or Non-Duopoly voters was below the 1/3 cutoff for the chart below. But if the tallies there are at all representative of the nation, Libertarians are at least twice as effective at rounding up upset votes compared to the parties that fought the Civil War over tariffs, embraced Comstock laws, enacted the Prohibition Amendment, imported the Income Tax from the Antebellum Communist Manifesto, napalmed Vietnam and bombed Ottoman dregs until terrorists attacked U.S. buildings.

Kleptocracy sources now group all but The Kleptocracy into unperson categories. Adding together their figures lets us sort states by tenuousness of The Kleptocracy’s grip on their own voters: 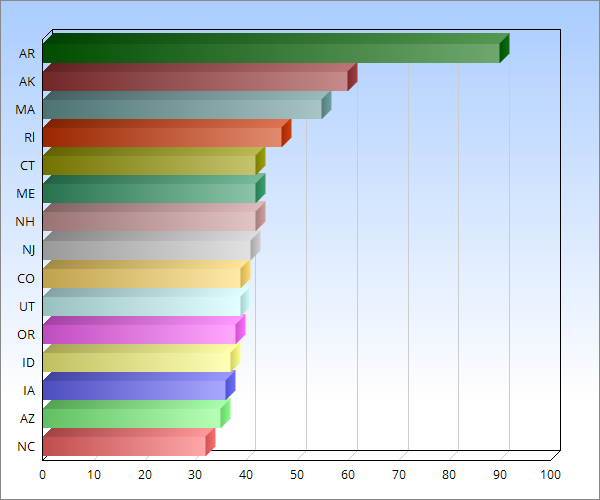 Compare the above with states in which Libertarian candidates covered the law-changing spoiler vote gap in 2016: 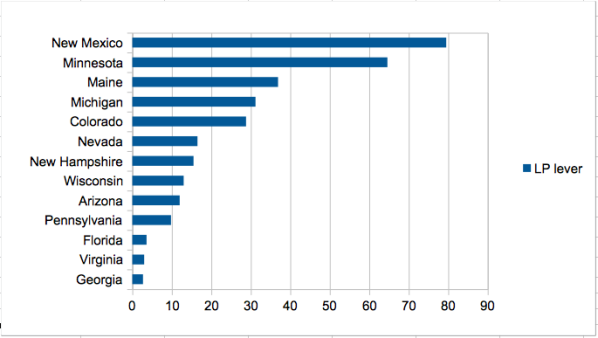 State leverage is a function of the size of the LP vote that covered the gap and the number of electoral votes involved in that race.

Colorado, New Hampshire and Arizona are definitely interesting places to look for Libertarian successes. Recall that success can mean repealing bad laws, getting our candidate elected, or both. The rest of the states in the top chart merit examination to see if unspoken-for voters there can be persuaded to let go of plant leaf prohibition, high taxes or efforts to make electric power scarce and expensive.

Private Gofundme donations for a border fence and Republican Senate gains this past election are strong evidence that mutilating the Libertarian Platform plank on border security has made it a liability to LP candidates, staff and volunteers. That makes it a current asset to parties eager for wholesale importation of girl-mutiliating terrorists and economic totalitarians. By restoring:

However, we support control over the entry into our country of foreign nationals who pose a credible threat to security, health or property.

to the Migration plank, we could again attract voters who are not interested in mass importation of berserkers or undesirables. The other sane alternative is to finish amputating the bloody stump and say nothing about borders–a subject already covered in the Constitution and federal regulations communist anarchists never read.

The other recently tacked-on plank–asking that someone other than government be entrusted with enforcement via deadly force–is also counterproductive, anti-libertarian, and certain to cause voters to cross busy streets to avoid our candidates. Complete mid-term vote counts are amazingly scarce, thanks to skillful elision, but LP supporters, donors and members have been dropping fast lately. That much is easy to verify.

Think about these planks if you are planning on attending the Libertarian National Convention in Austin.